What is a sunlight sensor? The sunlight sensor is a high-precision light-sensitive transmitter with an output value measurement unit of Lux. An illumination sensor is used for the outdoor measurement of light intensity. The illuminance sensor adopts a wall-mounted waterproof shell. There are two ranges of 0-65535 lux and 0-20 million lux. We provide sunlight sensor and temperature, humidity, sunlight 3 in 1 sensor.

The RS-GZ*-*-2 solar light sensor is small in size and low in price. It is a product that is very worth buying. 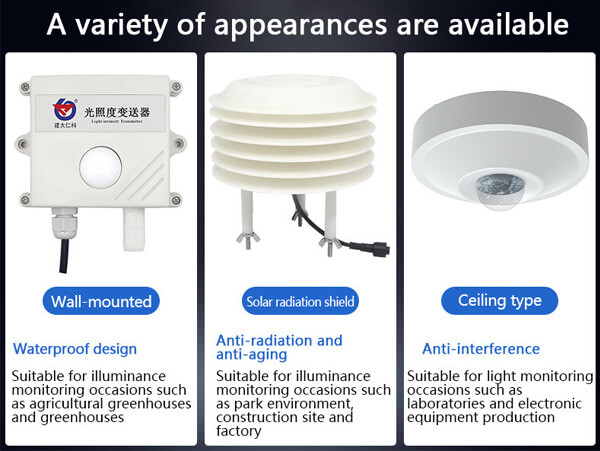 5. We offer many types of solar light sensors for different applications. Some light sensors can integrate many other modules to measure many elements.

Q: Why do we need to measure light?

Sunlight is of great significance to agriculture, especially in water-scarce areas. Different crops require different amounts of sunlight, so it is important to know which land is most exposed. As the water supply in many areas is becoming tighter and tighter, farmers have financial and social obligations to limit water consumption while maintaining the hydration of crops. One strategy adopted is to water the crops in the afternoon or evening to prevent the soil and plants from being scorched by the sun before they absorb the water. You can use the light sensor to automatically manage the sprinkler system and only water when the sun is not the brightest. When combined with other weather monitoring equipment to collect data about temperature, pressure, and humidity, the system can not only water in dim sunlight but also intelligently detect upcoming rain or clouds to optimize its watering schedule.

Q: How to measure light?

The illuminance can be directly measured with an illuminance sensor. The unit of illuminance is lux. For an object that is uniformly illuminated by light, when the luminous flux obtained on an area of 1 square meter is 1 lumen, its illuminance is 1 lux.

Q: How to install the light sensor?

The illuminance sensor should be installed in an open surrounding area without any obstacles above the sensing surface. Then put the radiometer cable plug directly to the north, adjust the horizontal position, and fix it firmly, and then connect the total radiometer output cable with the recorder to observe. It is best to fix the cable firmly on the mounting frame to reduce breakage or intermittent interruption on windy days.

Q: How does the sunlight sensor work?

Illuminance sensor working principle: the illuminance sensor is based on the principle of the hot spot effect. This sensor mainly uses detection components that have a high response to low light. These sensing elements are actually like the photosensitive matrix of the camera. The wire-wound electroplating multi-junction thermopile has a black coating with high absorptivity on its surface. The hot junction is on the sensing surface, and the cold junction is located in the body. The hot and cold junctions generate a thermoelectric potential. In the linear range, the output signal is proportional to the solar irradiance. The visible light through the filter irradiates the imported photodiode, and the photodiode converts into an electrical signal according to the visible illuminance, and then the electrical signal enters the sensor’s processor system to output the binary signal that needs to be obtained.

The light sensor can convert the light intensity value into a voltage value. The light intensity sensor is composed of a transmitter, a receiver, and a detection circuit. The transmitter is aimed at the target to emit a beam, and the beam continuously emits or changes the pulse width; the triangular reflector has a firm structure The transmitter can accurately return the light beam from the reflector; the receiver is composed of photodiodes, phototransistors, and photocells; in front of the receiver, there are optical elements such as lenses and apertures, and behind it is the detection circuit. It can filter out valid signals and send them.

Q: Do you have this sensor video?

Q: Where to use lux meter?

Lux meter is widely used in agriculture, forestry, greenhouse cultivation, breeding, and construction of light measurement and research. The application of the light sensor in agricultural planting and livestock and poultry breeding can help us accurately grasp the sunshine time law, light saturation point, and light compensation point of plants and livestock and poultry production and growth, and then adjust their illumination through artificial control technology. Preference, to control and improve the scientific growth of livestock, poultry, and crops to achieve the goal of high yield.

A greenhouse is a closed environment that provides optimal conditions for plant growth and promotes plant growth by controlling indoor and outdoor environments. A complete

What Is IoT? Top 16 IoT Sensors And Applications

What is IoT? IoT is the “Internet of things“. It is an extended and expanded network based on the Internet. It combines various information sensing

What is smart farming? Smart farming is the application of Internet of Things technology to traditional agriculture, using sensors and software to control agricultural production

The weather station can provide users with comprehensive weather information over the years. Regular maintenance of weather stations is an important operation to ensure measurement

What Is The Working Principle Of The Illumination Sensor?

The illumination intensity is abbreviated as illuminance, which is a physical term that refers to the luminous flux of visible light received per unit area.